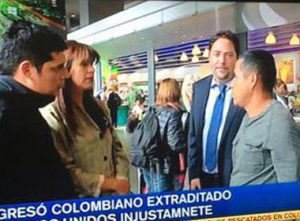 Mr. Enriquez Guerrero, a Colombian national, was charged with conspiring to import hundreds of kilograms of cocaine into the United States.  Mr. Guerrero was also charged with the same offense in Colombia for which he was sentenced to 87 months.  Prior to the completion of his sentence in Colombia, Mr. Enriquez Guerrero was extradited to the United States.

Prior to the commencement of trial, Mr. Seitles explained to the government that the Colombian Supreme Court actually denied the extradition of his co-defendant.  Further, Mr. Seitles successfully argued that Mr. Enriquez Guerrero’s role was far less serious than his co-defendant.  In the interests of justice, the government, lead agent, and the district court agreed to a sentence of time-served.

Mr. Enriquez Guerrero served a total sentence of three (3) months in the United States, one of shortest terms of incarceration for an extradited Colombian national.   Mr. Seitles then returned with his client to greet his family in Bogota.